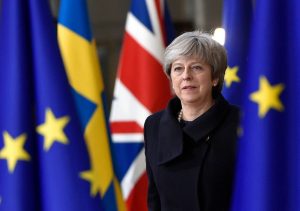 On Monday 10 December Prime Minister Theresa May deferred the vote on the Withdrawal Agreement in British parliament, without mentioning a new date.

Mrs May aimed to get (legal) assurances from her EU partners about the modalities how to apply –and end– the agreed ‘backstop’, the arrangement according to which at the end of the transition period –and unless by that time an alternative solution would have been agreed– a EU-UK ‘single customs territory’ will be established in the context of which Northern Ireland will also remain bound to the EU basic internal market rules. Brexiteers do consider such a straitjacket unacceptable because, according to the present texts, the UK will not be able to terminate the backstop unilaterally. The arrangement will also hinder the UK to conclude trade agreements with other countries.

However, the European Council of 13 December only concluded that it is ‘the Union’s firm determination’ to work speedily on a further agreement with the UK that establishes by the end of the transition period alternative arrangements, so that the backstop will not need to be triggered. So, the European Council offers a political expression of good will, however no (legal) assurances.

As a result Mrs May has become isolated in the debate in Parliament. And, perhaps more importantly, there seems to be no majority in the British Parliament for whichever withdrawal approach.

All in all British politics is not in a position to take a carefully considered decision about the Withdrawal Agreement. The organisation of new general elections will also not solve the matter, as divisions about Brexit within and between the most important parties will continue to exist.

The only logical option therefore is to allow the British people to speak out once more. The people has been misinformed –not to say mislead– in 2016 when asked for a vote on Brexit; the people has witnessed what a chaos has arisen in Britain during and after the end of the withdrawal negotiations; and politics in the country finds itself in complete disarray.

Again, if politics cannot solve the issue, then let the people do it! A second referendum is –by far– the best option. Three choices should be submitted to the people: the present deal, no deal or remain.

In this context two side-remarks:

Discussion to be continued…