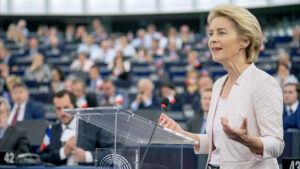 On 1 December the new European Commission, under the leadership of Ursula von der Leyen, took office. The new Commission has presented six priorities: a European Green Deal; an economy that works for people; a Europe fit for the digital age; protecting our European way of life; a stronger Europe in the world; and a new push for European democracy.

In that last context – a new push for European democracy – Von der Leyen confirmed in her speech of 27 November before the European Parliament that a ‘Conference on the Future of Europe’ will be organised, to start in 2020 and to run for two years. The Conference must bring citizens, civil society and European institutions together. Earlier in her address of 16 July before that same Parliament Von der Leyen had already launched such an idea.

In parallel, the French President Macron and the German Chancellor Merkel presented on 26 November a non–paper on ‘key questions and guidelines’ to be discussed – also – in the framework of an upcoming ‘Conference on the Future of Europe’. In their non-paper both leaders explicitly refer to the Commission’s initiative to convene such a conference.

In both approaches – the one of Von der Leyen and the one of Macron/Merkel – a mixture of subject matters is presented: policy domains and principles. Policy matters like climate change, migration, digitalisation and the ‘social’ market economy belong to the first category. Principles like the rule of law (and fundamental values) and Europe’s role in the world are covered by the second.

Both categories – policies and principles – are of different nature. The (further) development of policies reflects objectives to be achieved, as a rule within a certain period. On the contrary, the rule of law and Europe’s role in the world refer to preconditions to be met in order to be able to develop effective policies at all. Moreover, whereas the respect of the ‘rule of law’ is about the internal EU stability, ‘Europe’s role in the world’ is connected to the external authority of the EU.

In both areas still a lot has to be improved.

Indeed, the rule of law is not respected all over the EU. For example, we should not accept that the independence of the judiciary and/or the media is violated in member states. So far, the European Commission has developed a firm but fair policy in these areas. In the first instance the Commission prefers the format of a dialogue with the member state in question, to try to solve pending problems. However, in case of need the Commission does not hesitate to address the Court of Justice in Luxembourg. That is a correct approach that should be continued and intensified in the future.

And, in order to enable the EU to play a proper global role, more ‘grip’ on international developments, actually some ‘hard’ power, is needed. A last dreadful example of a file where the EU, despite being an interested party, was completely absent in the debate, was the Turkish intervention – in October – in North Syria. In a world full of tensions and unrest the EU and its member states must perform as a unity, act timely and vigorously. This means inter alia that unanimity as the general rule for decision making in the Council is not sustainable.

Without full respect of the rule of law (and fundamental values) in all the member states, and without being able to play a proper role on the world scene, the Union will be gradually marginalised in the performance of its activities. Even worse, its internal infrastructure may be negatively affected when external pressures become too strong.

Therefore our politicians (Member States, Commission and European Parliament) must first and foremost reinforce the internal stability and external authority of the Union. Only once such objectives will have been achieved, further ambitions with regard to concrete policies can be effectively implemented.