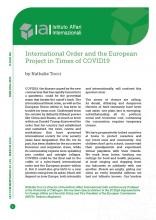 The international liberal order, as well as the European Union within it, has been in trouble for years now.

Challenged from the outside by defiantly illiberal powers like China and Russia, as much as from within as Donald Trump disavowed the order that his country had established and sustained, the rules, norms and institutions that have governed international society for over seventy years have languished. The EU, for its part, has been shaken by the successive Eurozone and migration crises, while its surrounding regions were spiralling into conflict and outright collapse. COVID19 could be the final nail in the coffin of a rules-based international order and the European project within it. But it could also give birth to a new phoenix rising from its ashes. Much will depend on how Europe, both internally and internationally, will confront this epochal crisis.