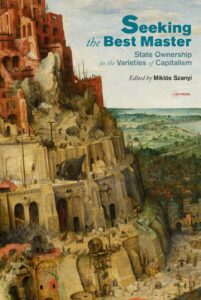 The economic crisis of 2008–2009 signaled the end of the post-Washington consensus on restricting the role of the state in economic and development policy. Since then, state ownership and state intervention have increased worldwide. This volume offers a comparative analysis of the evolution of direct state intervention in the economy through state-owned companies in Austria, Brazil, France, Germany, Hungary, Poland, Turkey, Singapore, and Slovenia. Each case study includes substantial explanations of historical, cultural, and institutional contexts.

All the contributors point to the complex nature of the current revival in state economic interventions. The few models that are successful cannot hide the potential problems of excessive state intervention, linked to high levels of moral hazard. State-owned enterprises are primary tools of market and price manipulation for political purposes. They can be used outright for rent seeking. Yet state-owned enterprises can also play important roles in prestigious national initiatives, like major public works or high-profile social and sports events. The authors conclude that after the uniform application of democratic market economic principles, the 2000s witnessed a path-dependent departure from standard economic and political operating procedures in developed countries.