TEPSA coordinated a study on the state of play of the EU’s relations with Mauritania, commissioned by the European Parliament’s Committee on Foreign Affairs and authored by Dr Morten Bøås, of the Norwegian Institute of International Affairs (NUPI). 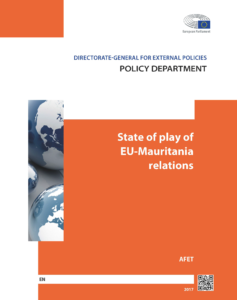 Mauritania, an important ally of the EU in the fight against terrorism in the Sahel, faces several inter-related development challenges: ensuring an efficient use of the revenue derived from natural resources, economic diversification and improved governance. The severity of these development challenges is increased by difficult political relations between the three main ethnic groups in the country, the dominant group being the Arab-Berber Bidhan. They constitute less than one-third of the country’s population, but dominate economically and politically. The Haratin, the largest group in the country, is made up of descendants of black Africans enslaved by the Bidhan (freed or still enslaved). The third group in the country is the West Africans or Black Mauritanians. Mauritania’s post-independence history is marked by repeated attempts by this group to assert its non-Arab identity and claim for a more equitable share of political and economic power. The tension that these divisions create is a problem in itself, but they can also be appropriated by violent Islamist insurgencies in the region. The urgency of this challenge is further complicated by the likelihood of increased climate change effects that the country is currently not adequately prepared for. This study therefore discusses the main political, economic and development challenges that contemporary Mauritania is faced with, illustrating how these challenges can only be properly grasped with consideration to their historical evolution. Based on this, the study investigates the current basis for EU-Mauritania relations and suggests a select number of policy areas for consideration, as this relationship continues to evolve around issues of mutual concern such as security and development.

The study is accessible here.