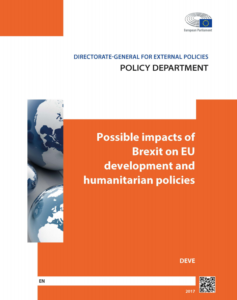 This study analyses the possible impact of Brexit on EU development and humanitarian policies.

Brexit could have a major impact on EU development and humanitarian policies. However, although Brexit is highly likely to happen, there are still uncertainties about the UK’s new foreign policy approach and its repercussions on aid. The UK may act under three different scenarios (nationalist, realist, cosmopolitan) with different consequences for EU aid. The UK’s leaving would challenge the EU’s role as the world’s leading donor: EU aid may decrease by up to 3 % and it could lose between 10 % and 13 % of its world aid share. Its presence, through ODA, in neighbouring countries throughout Eastern Europe and North Africa could be particularly affected, with a cut of between 1 % and 4 %, depending on different scenarios. The EU could react to Brexit by adopting two distinct approaches to foreign policy and development cooperation: either limiting its role to that of a regional power or growing to become a global leader. In the first approach, Brexit would have a very mild effect and would lead to very few policy challenges. However, in the second, the EU would need to compensate for the loss of Britain’s contribution to EU aid, both in quantitative and qualitative terms.