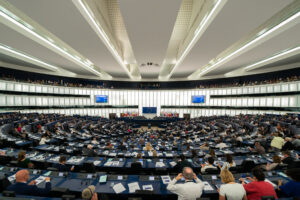 TEPSA and its German member, Institut für Europäische Politik (IEP), organised the German EU Pre-Presidency Conference “Shaping the Future of Europe” on 25-26 June 2020. In the midst of the challenges posed by the COVID-19 crisis, Germany will assume the Presidency of the EU Council on 1 July 2020.

The aim of the TEPSA Pre-Presidency Conference is to bring together researchers from the EU member states and the EU candidate countries, policy-makers, media, civil society organisations, and the broader public in order to discuss the agenda and challenges of the upcoming German Presidency. The Pre-Presidency Conference addressed the response of the EU to the Covid-19 crisis, migration, enlargement, climate change and many other topics.

The conference was organised in a virtual format. Further information is available here.

Your can read the full conference report here.

RECOMMENDATIONS FROM MEMBERS OF THE TEPSA NETWORK TO THE GERMAN PRESIDENCY

Prior to the event, TEPSA has a tradition of formulating recommendations to present to the incoming Council Presidency. These recommendations are formulated by experts from the TEPSA network, without necessarily representing the views of TEPSA or its Member Institutes. They were presented to the incoming German Council Presidency on the occasion of the TEPSA Pre-Presidency Conference on 25-26 June 2020 in Berlin.

Read the recommendations from members of the TEPSA network to the incoming German Presidency here.

The German Pre-Presidency Conference was held online due to COVID-19. As a result, we are able to present recordings of the conference to viewing here. We enjoyed three panels and five roundtables across the two days of the conference.

Our first panel was on the topic of Youth Ideas, where representatives from #EngagEUrCouncil discussed their ideas for the future of Europe with Axel Dittmann from the German Federal Foreign Office, and Funda Tekin from IEP.

This initial panel was followed up by the #InDivEU panel: “The EU’s Differentiated Future After Brexit”, featuring Axel Dittmann from the German Federal Foreign Office, Prof. Dr. Brigid Laffan from the European University Institute, Prof. Dr. Frank Schimmelfennig from ETH Zürich, Dr. Funda Tekin from IEP Berlin, and was moderated by Dr. Christian Frommelt from the Liechtenstein Institute.

The afternoon of PPC Berlin featured three parallel roundtables on topics key to the challenges faced by the German Presidency of the Council of the European Union.

The second parallel roundtable, on the topic of Enlargement and Neighbourhood Policy, featured contributions from Prof. Dr. Danijela Jaćimović of the Faculty of Economics, University of Montenegro, Edgar Gansen, Head of Division EU External Policies including EU-Enlargement at the German Federal Foreign Office, Dr. Ilke Toygür from the Elcano Royal Institute, Prof. Dr. Giorgi Khistovani, the Research Director at PMC Research Center, and President of the Razumkov Centre Yuriy Yakymenko. The panel was moderated by Dr. Katrin Böttger.

On the topic of the European Green deal and climate change, Prof. Dr. Christian Calliess from the Free University Berlin, Sabine Nallinger, the managing director of Foundation 2°, Dr. Karsten Sach, the Director-General of International and European Policy and Climate Policy at the German Federal Ministry for Environment, Nature Conservation and Nuclear Safety, and Prof. Dr. Gaby Umbach from the European University Institute, gave their contributions. The panel was moderated by Prof. Dr. Johannes Pollak.

The second day of the German Pre-Presidency Conference began with words of welcome from Prof. Dr. Johannes Pollak from Webster Vienna Private University.

The first session of day two focused on the topic of whether the EU should “learn to speak the language of power”. Moderated by Prof. Senem Aydin-Düzgit from the Istanbul Policy Center, the panel featured expert contributions from Prof. Dr. Stefan Fröhlich from the Institute of Political Science, University of Erlangen-Nuremberg, Director for Policy Planning at the German Federal Foreign Office, Sebastian Groth, and Dr. Nicoletta Pirozzi from Istituto Affari Internazionali.

The afternoon session of the conference’s second day also featured parallel roundtables. The first of these was moderated by Prof. Dr. Michael Kaeding from the University of Duisburg-Essen. On the topic of Institutional Reforms in Times of Crisis Management, the roundtable featured contributions from Dr. Katrin Auel from the Institute for Advanced Studies Vienna, Gaby Bischoff MEP, Jim Cloos, Deputy Director-General of the General Secretariat of the Council of the European Union, and Prof. Dr. Wolfgang Wessels of the Center for Studies in Turkey and the European Union at the University of Cologne.

The final roundtable of the second day of the German Pre-Presidency Conference was on the topic of European Social Cohesion and Social Security. It was moderated by Pola Schneemelcher, and featured contributions from Prof. Dr. Iain Begg from the LSE, Dr. Hrvoje Butković, from the Institute for Development and International Relations (IRMO), Prof. Dr. Miriam Hartlapp from the Free University Berlin, and Dr. Rolf Schmachtenberg, State Secretary at the German Federal Ministry of Labour and Social Affairs.

The German Pre-Presidency Conference ended with concluding remarks from Prof. Dr. Lucia Mokrá,
Chairperson of the TEPSA Board, and Jim Cloos, the Deputy Director-General of the General Secretariat of the Council of the European Union.