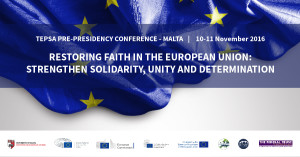 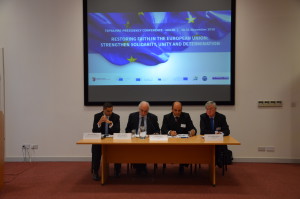 speech on the priorities of Malta’s Presidency of the Council of the EU, upon which recommendations were then offered by TEPSA’s researchers. The conference was also addressed by Minister Carmelo Abela, Parliamentary Secretary Ian Borg and three Maltese Members of the European Parliament, Dr Roberta Metsola, Mrs Marlene Mizzi and Dr Alfred Sant. The speakers attended three discussion panels focusing on the economic and political dimensions of the Mediterranean Region, on migration and BREXIT, their leitmotif challenge being  resumed in the Conference’s title: “Restoring faith in the European Union: strengthen solidarity, unity and determination”. 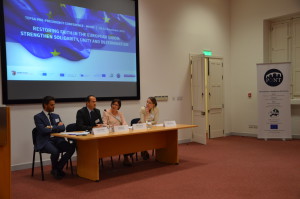 The main aim of TEPSA’s PPCs is to bring together academics and researchers from the broad TEPSA network, policy-makers, media and civil society in order
to discuss the agenda and challenges of the upcoming Council Presidencies. TEPSA’s PPCs represent a major platform for communication and exchange between policy-makers and academia. Prior to the event TEPSA researchers formulate recommendations to be presented to a high-rank official of the government concerned in a plenary session. Moreover, the conferences actively involve civil society and media actors, who are able to interact with practitioners and academia. Finally, the insights gained during these conferences and seminars directly feed into future research on the EU and into EU policy making. Thanks to their genuinely European and transnational nature and to the involvement of civil society, TEPSA’s Pre-Presidency conferences actively contribute to shaping a European public sphere. 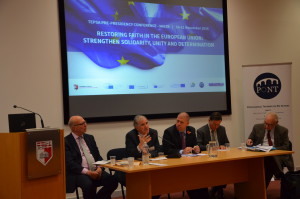 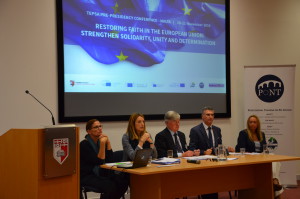 PC was also an integral part of the TEPSA’s PONT project, aimed at providing a bridge connecting young academics and EU practitioners, in order to improve the employability of young researchers.

More information about the PPC and the final programme are available here.

The report of the PPC Malta is available here.