Maria Giulia Amadio Viceré, The Future Is Back: The EU, Russia and the Kosovo-Serbia Dispute, IAI Papers, 19:19, IAI, October 2019. 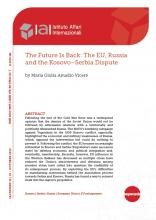 Following the end of the Cold War there was a widespread opinion that the demise of the Soviet Union would not be followed by adversarial relations with a territorially and politically diminished Russia. The NATO’s bombing campaign against Yugoslavia in the 1999 Kosovo conflict, especially, highlighted the economic and military weaknesses of Russia, which opposed the intervention but could do nothing to prevent it. Following the conflict, the EU became increasingly influential in Kosovo and Serbia (Yugoslavia’s main successor state) by offering economic and political integration and, eventually, membership. Recently, however, EU influence in the Western Balkans has decreased as multiple crises have reduced the Union’s attractiveness and divisions among member states have called into question the credibility of its enlargement process. By exploiting the EU’s difficulties in maintaining momentum behind the association process towards Serbia and Kosovo, Russia has found a way to reinsert itself into the region’s geopolitics.