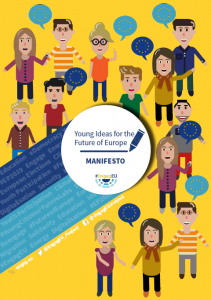 It’s time for young ideas for and a young commitment to Europe! That is why over the past months, the Institut für Europäische Politik has empowered young EU citizens to develop and voice their ideas for Europe as part of the project #EngagEU. Together we have written a manifesto with demands on environmental, foreign and migration policy as well as European identity. This manifesto will be discussed with the public on 30 April 2019 as part of the #1stYoungCitizens’Convention in Berlin. At the same time, we want to network with other civil society campaigns at our EU Campaign Hub in order to send a strong signal to Europe prior to the European elections. We are happy that the President of the Federal Republic of Germany, Frank-Walter Steinmeier, has announced himself for a tour of this EU Campaign Hub in order to personally get to know civil society initiatives and to enter into conversation with committed Europeans.