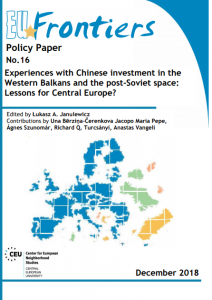 As China’s global role is increasing, its influence is being increasingly scrutinized. The Belt and Road Initiative is probably the most visible manifestation of China’s global aspirations. Much attention is being paid to its role in Africa and Asia. Publications highlight the ‘Backlash to Belt and Road’ in Central and Southern Asia, the notorious ‘debt trap diplomacy’ also associated with China’s investment in Asia and Africa or the potential risks for governance in fragile states. Nevertheless, other analysts highlight the opportunities and benefits of Chinese activity in these regions. At the same time, Western Europe is also getting weary of China’s growing role in Europe’ economy amidst concerns about ‘technology and know-how outflow’. The same goes for China’s takeover of key port infrastructure in the Mediterranean and the North Sea.

The purpose of this publication, and the conference from which it emerged, is to try to take stock of the experiences of Central Europe’s neighbours that were far more exposed to China’s and by reviewing Central Europe’s own interactions with China’s investment efforts so far to think about which of these experiences from the post-Soviet region and from the Western Balkans should be taken into account by Central European countries in their dealings with China.