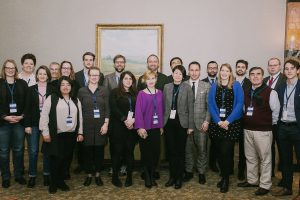 The second international conference of the Horizon 2020 project SEnECA took place in Almaty, Kazakhstan, from 29 to 31 January 2019. The conference comprised high-panel podium discussions, an academic policy advice training and a scenario building workshop on EU-Central Asia relations. It was the third event during which the SEnECA consortium members from eleven involved countries could meet in person, discuss the project progress and develop new ideas. The conference was organised by the Central Asia Institute for Strategic Studies (CAISS), a Kazakh think tank based in Almaty.

A total of 85 academics, government officials, practitioners and students (including SEnECA partners) from Europe and Central Asia participated in the conference elaborating on the current state of affairs of EU-Central Asia relations. Ambassador Peter Burian, the EU Special Representative for Central Asia, provided new insights on the revised Central Asia strategy of the EU, which is currently being finalised and which will be presented to the public in summer 2019. Burian stressed that a sustainable Eurasian connectivity is essential to the EU and that the report “Connecting Europe and Asia – Building blocks for an EU Strategy”, that was published in October 2018, is going to be a significant framework to improve economic ties between the two regions. Furthermore, the Ambassador underlined the importance of strengthening the youth in Central Asia through initiatives related to employment opportunities, private sector development and financial investment.

During the academic advice training, junior and senior researchers acquired useful skills on how to improve the “transfer” of research results to the wider public and how to best approach decision-makers. Dr Sebastian Schiek, researcher at the German Institute for International and Security Affairs, gave input on how to write a policy paper and presented good and bad examples of such publications. One prominent lesson learned during the workshop was the realisation that approaching decision-makers is a much more sensitive undertaking in Central Asia than it is in Europe. Hence, the “transfer” would have to be conducted in a less critical and less formalized way in the Central Asian context.

Another highlight of the conference was the scenario building workshop which served as a thought experiment. Divided into three groups, participants had to identify important drivers for the regional cooperation in Central Asia and to sketch out three different future scenarios while focusing on those drivers. Participants regarded the following factors as the two most crucial ones: “the (high or low) engagement of external powers in Central Asia” as well as the “(strong or limited) change in the domestic political systems in Central Asia”. Interestingly, the three scenario groups came to very different conclusions when imagining a strong involvement of external powers in the region, which showed the wide range of perceptions of Russia, China, the US and the EU among Central Asians.

Overall, the conference was a great opportunity for researchers and stakeholders to meet, to generate more understanding for each other’s views and to develop common project ideas. The project “SEnECA – Strengthening and Energizing EU-Central Asia Relations” aims to improve research cooperation and to strengthen capacities in research and policy advice in the EU and Central Asia. It is led by Prof. Dr Michael Kaeding, Professor for European Politics at the University of Duisburg-Essen (UDE), and Dr Katrin Böttger, Director at the Institut für Europäische Politik (IEP). The project is funded with around 1.5 million Euros under the European Union’s Horizon 2020 research and innovation programme for a period of two years (January 2018 – December 2019).