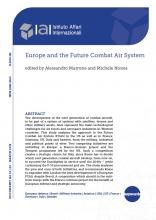 The development of the next generation of combat aircraft, to be part of a system of systems with satellites, drones and other military assets, does represent the main technological challenges for air forces and aerospace industries in Western countries. This study analyses the approach to the Future Combat Air System (FCAS) in the US as well as in France, Germany, UK, Italy and Sweden, from the military, industrial and political points of view. Two competing initiatives are unfolding in Europe: a Franco-German project and the Tempest programme led by the UK. Such a competition creates a strategic choice for Italy, since Rome has to decide which next generation combat aircraft develop, from now on, to succeed the Eurofigther in service until the 2040s – while continuing the F-35 procurement and use. The study analyses the pros and cons of both initiatives, and recommends Rome to negotiate with London the joint development of a European FCAS, despite Brexit. A cooperation which should in the mid-term merge with the Franco-German project for the benefit of European defence and strategic autonomy.