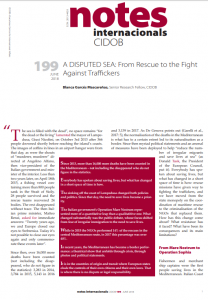 Since 2013, more than 16,000 more deaths have been counted in the Mediterranean – not including the disappeared who do not figure in the statistics. Everybody has spoken about saving lives, but what has changed in a short space of time is how.

“The sea is filled with the dead”, no space remains “for the dead or the living” lamented the mayor of Lampedusa, Giusi Nicolini, on October 3rd 2013 after 366 people drowned shortly before reaching the island’s coasts. The images of coffins in lines in an airport hangar were from that day, as were the shouts of “murderer, murderer” directed at Angelino Alfano, then vice-president of the Italian government and minister of the interior.

Less than two years later, on April 18th 2015, a fishing vessel containing more than 800 people sank in the Strait of Sicily. 28 people survived and the rescue teams recovered 24 bodies. The rest disappeared without trace. The then Italian prime minister, Matteo Renzi, asked for immediate answers: “Twenty years ago, we and Europe closed our eyes to Srebrenica. Today it’s not possible to close our eyes again and only commemorate these events later”.