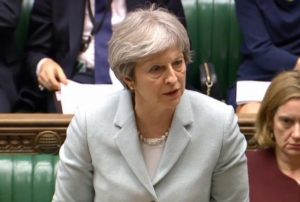 On 10 April the European Council decided to extend the departure deadline for the UK until, ultimately, the end of October.

The question is: why, for what purpose? The answer is not evident. On the one hand, all sensible people try to avoid a ‘no deal’ solution. On the other hand, the political situation in the UK is chaotic: some Members of Parliament aim to have a no deal outcome, others not. Apart from that, the package agreed during the November 2018 negotiations in Brussels –Withdrawal Agreement and Political Declaration– has been rejected three times so far in the House of Commons. And, there is no indication as yet that a chance exists to have that package approved in the short term.

As such the Withdrawal Agreement and Political Declaration are appropriate texts. Taking into account the British demands –i.e. the demands expressed by the UK Government– to not participate in the internal market cooperation nor in the EU customs union, the Withdrawal Agreement reflects a smooth schedule for the UK on its way out. In its turn, the Political Declaration provides the perspective of a close and intense UK-EU relationship in the future.

Surprisingly enough, however, during the parliamentary debates in London there hasn’t been any discussion about ‘content’, the essentials and objectives of the Agreement and Declaration. Essentially, intra-party interests (Conservatives) and political power interests (Labour) have determined the whole process. In this way the British national interest has been subordinated to pure party politics.

Is there any chance that the inter-party negotiations between Conservatives and Labour will result in a ‘national’ position? That is highly unlikely. Whereas Labour pushes the customs union model, such a scenario represents exactly if it is not the first, then at least the second ‘red line’ which the UK Government has said not to cross. Having said that, because the debate is not so much focused on the legally binding Withdrawal Agreement text (that document cannot be negotiated), there may be possibilities to adapt the non-binding Political Declaration in such a way that Conservatives and Labour as well as the EU may reach an agreement. Another question, though, is whether such an outcome can be considered binding for the successor of Prime Minister May who, as is well known, will resign after the withdrawal deal has been approved. So, the parliamentary discussions in the UK are dragging on without a clear perspective.

In Brussels the Brexit file has required –and still requires- lots of working time, attention and energy on the part of the other 27 member states and the institutions. People in Brussels get frustrated, not to say ‘fed up’ with the UK. Because practically nothing has been achieved since November 2018, when the texts of the Agreement and Declaration were agreed. In that context, the prospect of a continuation of UK membership of the Union until the end of October (and, who knows, still for a longer period…) is not attractive. That, by the way, is the reason why the European Council conclusions of 10 April include instructions to the UK to ‘not undermine the regular functioning of the Union and its institutions’ respectively to ‘refrain from any measure which could jeopardise the achievement of the Union/s objectives’. A nice atmosphere to work in!

In the meantime the EU à 27 has been blocked from looking to its own future. Illustrative in that regard will be the answer to the question whether Theresa May –in light of the UK prolonged membership– will be invited to participate in the Sibiu informal summit meeting of 9 May. As is well known, our heads of state and government will discuss that day (Europe day!) the future of the EU after the UK departure. If Prime Minister May will indeed be invited, a peculiar situation will arise: a member state wishing to leave will be involved in discussions about the EU agenda after its departure. Is somebody able to explain the logic of such a surrealistic scenario?

Another specific –but at the same time risky– element concerns the necessity for the UK Government to organise European elections at the end of May. Whereas the Government in fact does not want to hold such elections, they may –and probably will– be forced to do so. As a result, an artificial but at the same time poisoned atmosphere during the campaign will provide a good opportunity for parties like the Brexit Party (the new party of Nigel Farage) to expose itself and will most probably result in big losses for the Conservative party.

There is only one positive aspect in all of this. Perhaps the elections can be useful for ‘remainers’ to show their disapproval on the way the Brexit file has been handled by the government. Because –and that is perhaps the most striking phenomenon of the whole process- the people invited to vote in the June 2016 referendum were not informed about the relevance of EU membership nor the consequences of a departure. Since these consequences are now better known, to have a second referendum is only logical. In that regard it should be recalled that the government also only became aware gradually of the consequences of the withdrawal (the Irish border, for example!). Anyway, expressions of support for a remain or a second referendum may be beneficial for the Liberal Democrats, to a certain extent Labour, the Scottish National Party and some other small political parties represented in Parliament (the Greens and The Independent Group-Change UK).

Now, preparing for a second referendum is a step which Prime Minister May will never undertake. She has constantly refused to initiate such a People’s Vote (‘The British people have already decided ……’). The same is true as regards revoking the notification to withdraw.

Probably therefore Prime Minister May will submit her deal at short notice for a fourth time to the House of Commons to vote. However, if that effort fails, in all honesty nobody knows what will happen: a split in the Conservative Party, a split  in the Labour Party, a leadership crisis within the Conservative Party, new general elections, a people’s vote, or a combination of all of the above.

British politics has become –or, rather, has already been for quite some time–unpredictable. Poor British people.