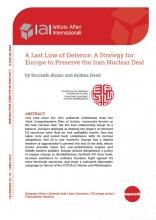 One year since the US’s unilateral withdrawal from the Joint Comprehensive Plan of Action, commonly known as the Iran nuclear deal, the EU–Iran relationship hangs in a balance. Europe’s attempts at limiting the impact of renewed US sanctions have thus far had negligible results. Iran has taken note and scaled back compliance with its nuclear obligations. Not all is lost, however. Europe has a limited window of opportunity to prevent the end of the deal, which would severely harm the non-proliferation regime and Middle Eastern stability. Europe should delegitimise a policy of regime change or destabilisation, facilitate EU–Iran trade, increase assistance to ordinary Iranians, fight against US extra-territorial sanctions, and wage a sustained diplomatic campaign in favour of the JCPOA in Tehran and Washington. Paper produced in the framework of the IAI-FEPS project entitled “Europe and Iran in a fast-changing Middle East: Confidence-building measures, security dialogue and regional cooperation”, June 2019.