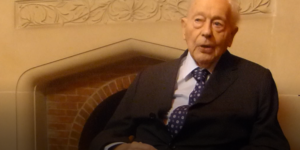 On the occasion of the funeral service for Jacques Vandamme on 27 January 2020 in Brussels, our Secretary General Jaap de Zwaan gave the following speech on behalf of TEPSA.

‘My name is Jaap de Zwaan, I am the Secretary General of the Trans European Policy Studies Association, TEPSA.
On behalf of TEPSA I present you, Madame Vandamme, and all family members our sincere condolences on the passing away of Jacques Vandamme.
TEPSA commemorates Jacques Vandamme as one of its leading personalities.

Jacques became involved in TEPSA shortly after the Association was founded – in 1974 – by four European studies institutes (a German, Italian, British and a French one).
Here in Belgium he soon involved TEPSA in the real European political debate. Because, at that time Jacques was special advisor of the Belgian Prime Minister Leo Tindemans, who was invited by his colleagues – the heads of state and government of the at the time 9 member states – to prepare a report about the European Union, essentially about the question what the future role and mission of that organisation could be. It was Jacques who suggested Tindemans to have a discussion about Europe’s future also with academics, more particularly the scholars of TEPSA.
In that way Jacques laid the foundation of what later became the triple ‘A’ approach of TEPSA: Analysis, Assessment and Advice.

A bit later Jacques founded his own Belgian institute, the Groupe d’Etudes Politiques Européennes; his group acceded to TEPSA; and he himself was appointed – just shortly afterwards –  as TEPSA’s chairman, a role which he successfully fulfilled for many years.
Moreover, it was Jacques who proposed the Fondation Universitaire – here in Brussels – as the venue, the headquarters, of TEPSA. Our Secretariat is still located there.

It was also him who invented the model of the so-called Pre-Presidency Conference: the conference organised by the TEPSA member institute in the country of the incoming Presidency of the European Union – shortly before the Presidency starts – to discuss the state of play of EU cooperation and the priorities of the incoming Presidency concerned. Therefore, it was Jacques who started this tradition of bi-annual conferences, a tradition which has remained alive up to the present day. To say it more precisely, the Pre-Presidency Conference has become the ‘flagship’ activity of TEPSA.

In several respects (I think of the – research – nature of TEPSA’s activities, the location of its headquarters and the type of activities to be undertaken) Jacques thus laid the basis for the continuation – these days the reference is to the ‘sustainability’ – of TEPSA’s work.
Also later, in fact all the time since, he remained interested in the developments and reforms TEPSA was undergoing. He always listened carefully and then gave his opinion – in most cases a positive one… In fact we still met Jacques rather often in the Fondation Universitaire – sometimes in the margin of a VIRA meeting – and we had animated discussions.
At present TEPSA is composed of 44 partners, 35 full members and 9 associated members. Our partners are located in 37 European countries, both countries within the European Union and beyond. So, the Association has enlarged, even more than the Union itself.

Finally, but perhaps even more importantly, Jacques was not only a nice – and wise – colleague. He also became a good friend of many of his TEPSA colleagues, often for lifetime.
Jacques was a great personality and an extremely pleasant person to talk with, about all kinds of subject matters. And, let’s not forget his sense of humour. And his smile. When making jokes, he always showed a smile enjoying, albeit modestly, his own pleasantries.
I still visited Jacques in October last. He was in a good mood and a relatively good shape, at least mentally, and we had lively discussions about TEPSA, European Union cooperation, Belgian politics etc. I am very happy that I paid him that visit still rather recently.
In short, we remember Jacques Vandamme as an inspiring and committed European, a bright academic, a great personality and a very good friend.

Dear family Vandamme, you will miss Jacques. We will miss him as well, TEPSA will miss him. Dearly.
We thank Jacques for all his contributions to our network. We owe him a lot and we are very grateful for that.
May he rest in peace.’