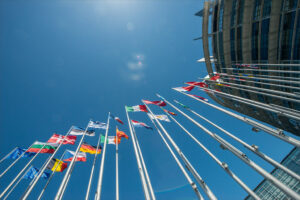 A year ago, I wrote an editorial about the concept of strategic autonomy and the need “… to look at all our major policies, assess our strengths and weaknesses and act accordingly.” The period of crises starting in 2008 forced the EU to respond and to take a full range of rather revolutionary measures, which all went into the direction of more Europe. This was a matter of necessity and survival. From 2016 onwards, as witnessed by the changing language used by the European Council, the EU started developing a more thought-through strategy towards developing the EU’s power and resilience; this had by now also become a matter of choice.

The Russian aggression against Ukraine has acted as an additional catalyst, accelerating this dual process and further transforming the EU. For the first time, the sanctions imposed on a third country have become an instrument of a real policy rather than a substitute for one. This policy combines the will to help Ukraine with a determination to lower our dependence on Russian oil and gas and to use our economic clout to show Russia that its present behaviour is totally unacceptable. There are divergences between Member States on some aspects of how far the sanctions should be taken, particularly in the field of energy. That is natural. But the fact is that unity has prevailed. Moreover, there seems to be a clear acceptance that the sanctions on Russia will carry a price tag for ourselves.

Energy is of course a key challenge in view of our collective dependence on Russian gas and oil*, the differences in national situations and the difficulty to switch between sources and providers of energy. The EU is nonetheless moving fast and decisively. The Commission will come forward with concrete plans shortly. Talks with the US and other providers of gas are ongoing and will help lower the need for imports from Russia. The Commission rightly insists on the link with our climate policy. Energy saving is the cheapest way to lower import dependence. The switch towards renewables will also contribute to the objective. In the short term, a crisis in the markets may lead to more use of polluting sources of energy including coal. It is vital not to let this derail the quest for carbon neutrality by 2050. In my January editorial I wrote that “… it would make sense for the EU to draw lessons from the vaccine procurement success and apply them mutatis mutandis to the energy field in the shape of grouped buying of gas” I did not expect this to happen so soon, but the European Council of last week precisely decided this step. This can become a game changer.

A quick word on migration. Europe has seen an influx of Ukrainians that dwarfs even that of Syrian and other refugees 2015. Here again, the EU reacted quickly, by invoking the directive on Temporary Protection. This instrument is ideally suited to deal with a situation where a neighbouring country experiences war and sees people search safety in the EU. This is akin to the role Turkey played during the war in Syria. It would simply have been impossible to deal with this influx via the usual asylum procedures. Member States are struggling to cope with the influx, but the reactions so far have been extremely encouraging, with Poland playing the leading role. This élan may have a positive effect on the ongoing difficult debate about a reform of our migration and asylum policies. It would be a nice case of solidarity in action leading to a better acceptance of solidarity as a horizontal principle.

In the field of security and defense, the EU a few days ago agreed on its new Compass. The Russian attack on Ukraine has certainly led to a stronger text and a much higher chance of implementing it. We should use the new honeymoon in transatlantic relations to convince Washington that European defense efforts are the best way to strengthen NATO. One important caveat: the increased military investments in Europe cannot just lead to increasing our purchases of American material. They will only be sustainable if they help the development of a much stronger and more united European defense industry. While the adoption of the Compass was expected, the use of EUR 1 billion of the European Peace Facility to finance the purchase by Ukraine of weapons was a surprise. This is a significant move. Together with the creation of the European Defense Fund, it will transform the EU into a key factor in security and defense.

There is one other major policy development, which augurs well for the future. It is not linked to the Ukrainian file, but it is very much part of the EU’s objective of strategic autonomy. I refer to the agreement between co-legislators on the Digital markets act (DMA) reached on 25 March. This is a major step to reign in abusive practices of the exceptionally large digital players. It is also a line of action that is novel on the international scene; hopefully, other key players will follow suit. By creating a more competitive economic space for fresh players and European companies it will also help addressing the weakness of Europe in terms of big digital players.

This latter aspect is key. Regulation cannot just be defensive and become an objective. Ideally regulation should create the right framework for developing our own industries. It is not normal that we live in a world where the GAFAs and the Chinese platforms are the only real players, amassing huge wealth and power and influence, while paying minimal taxes. We need a level playing field. But that also requires massive investments and a less risk-averse environment. In “The Innovators”, Walter Isaacson provides a fascinating insight into the American digital revolution; it is an object lesson in how to promote innovation. This is an area where Europe has a lot to learn from the U.S.; we have the brains, the ability, and the technology, but we seem to be lacking the dynamism, the cross fertilisation, the risk-taking  that characterize the American society. The significant increase in risk capital in countries like France over the last two years is an encouraging sign in this respect. It is now key to also find agreement quickly on the Digital Services Act, which looks at the provision of digital services and adds another leg to our digital framework.

I will conclude by saying that we live in momentous times, with huge challenges but also opportunities to reshape our Union and make it stronger and more resilient.

* In the first semester of 2021, Russia accounted for 46.8% of EU gas imports and 24.7% of oil imports. In both cases, Russia is the largest single provider.