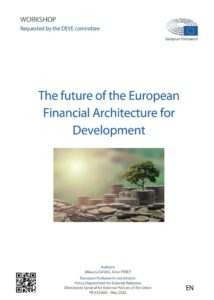 TEPSA has coordinated a briefing requested by DEVE Committee of the European Parliament. The briefing was authored by Aitor Pérez, Chief Consultant, Ecoper, Spain, and Ilaria Giustacchini, Project Manager at the Trans European Policy Studies Association (TEPSA). The briefing is entitled “The European Financial Architecture for Development: evolution or revolution?”.

This briefing aims to assess the extent to which EFAD members (the European Investment Bank, the European Bank for Reconstruction and Development and Member States’ Development Finance Institutions) respond to EU expectations, in terms of development orientation and EU global influence. It does so by drawing on key documents and data published by these institutions and by the European Commission in the context of its External Investment Plan and Team Europe. The Briefing concludes that, although the Team Europe approach emerged as a response to the COVID-19 crisis, it has overlapped with an intense debate on EFAD fragmentation, entry into force of the new multiannual financial framework, enhancement of the European Union External Investment Plan and other political factors that have provided momentum to the old idea of working better together. From this perspective, the Briefing supports intentions of maintaining the existing institutional architecture (Status Quo+ scenario) and provides recommendations for enhancing the role of each EFAD member, including: the EIB’s active involvement in developing planning at country level; expansion of EBRD operations to some Sub-Saharan countries; and reinforcement of the EU-African Development Bank partnership in private sector development. It also recommends that the EP, including DEVE, request a Team Europe annual report looking at collaboration among EFAD members from the long-term perspective of EU development policies’ integration and recommends the EP explores the possibility of improving EFAD members’ regulatory convergence by means of EU legislation.