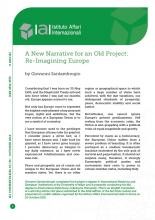 Considering that I was born on 30 May 1993, and the Maastricht Treaty entered into force when I was just six months old, Europe appears normal to me. Not only has Europe come to represent the highest embodiment of my personal hopes, rights and ambitions, but the very notion of a European Union is to me a symbol of normalcy.

Peace and prosperity are of course not unique to the European Union and its member states. Yet, there is no other region or geographical space in which such a large number of states have achieved, with the due variations, our widespread standards of prosperity, peace, democratic stability and social justice. Nevertheless, one cannot ignore Europe’s present predicaments. Still reeling from the economic crisis, the Union is also grappling with a political crisis of equal magnitude and gravity.

Perceived by many as a technocracy, the European Union suffers from a severe problem of branding. It is often portrayed as a soulless bureaucratic machine motivated by the sole goal of survival and perpetuation. It should not surprise many, therefore, if strongly Eurosceptic political parties and movements have risen to power in certain member states, including Italy.

Actually, what is surprising is that this did not happen before. (…)