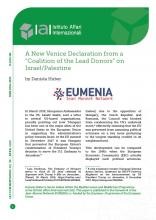 Daniela Huber, A New Venice Declaration from a “Coalition of the Lead Donors” on Israel/Palestine, IAI Commentaries, 19:30, IAI, April 2019.

Today, the EU faces a US administration that is tearing down the last parameters of standing US policy on Israel/Palestine. In particular, Trump is taking aim at the “final status issues”: Jerusalem, the Palestine refugees, or – when it comes to Syria – the Israeli-occupied Syrian Golan Heights. This US policy has dangerous consequences. It risks exacerbating a conflict in Europe’s direct neighbourhood and undermines established international norms and international law. As in the 1980s, Europe continues to have a clear interest to act to protect its own interests and international law. However, unlike the 1980s, the EU has become absorbed in the US-led Middle East Peace Process in the framework of which it became a key “payer”, giving up its own-standing role as a “player” in the process.