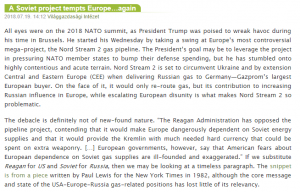 All eyes were on the 2018 NATO summit, as President Trump was poised to wreak havoc during his time in Brussels. He started his Wednesday by taking a swing at Europe’s most controversial mega-project, the Nord Stream 2 gas pipeline. The President’s goal may be to leverage the project in pressuring NATO member states to bump their defense spending, but he has stumbled onto highly contentious and acute terrain.

Nord Stream 2 is set to circumvent Ukraine and by extension Central and Eastern Europe (CEE) when delivering Russian gas to Germany—Gazprom’s largest European buyer. On the face of it, it would only re-route gas, but its contribution to increasing Russian influence in Europe, while escalating European disunity is what makes Nord Stream 2 so problematic.

The debacle is definitely not of new-found nature. “The Reagan Administration has opposed the pipeline project, contending that it would make Europe dangerously dependent on Soviet energy supplies and that it would provide the Kremlin with much needed hard currency that could be spent on extra weaponry. […] European governments, however, say that American fears about European dependence on Soviet gas supplies are ill-founded and exaggerated.”

If we substitute Reagan for US and Soviet for Russia, then we may be looking at a timeless paragraph. The snippet is from a piece written by Paul Lewis for the New York Times in 1982, although the core message and state of the USA-Europe-Russia gas-related positions has lost little of its relevancy.