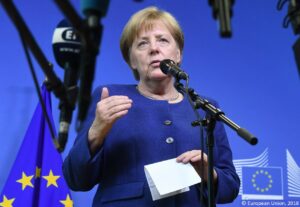 Mrs Merkel came into power in 2005. This was the year when a new MFF was being negotiated under the Luxembourg Presidency. It was as always a highly controversial matter, with Germany playing a key role as the biggest net payer. The new Chancellor was very instrumental in reaching a final deal under the UK Presidency in the first half of 2006, making her mark Brussels at this early stage already. She surprised people with her quiet authority, her knowledge of the files and her tactical skills. She showed that she meant business and could do business.

The departure of Mrs Merkel is a major event for the EU, because of the importance of her country, her personality and the duration of her mandate. She has played a key role in all the momentous challenges the EU has had to face over the past 16 years.

During the German Presidency in 2007, she helped engineer an important breakthrough on climate change at the spring European Council. The German Presidency also succeeded in cutting the Gordian knot of Treaty reform that the French and Dutch electorates had tied with their rejection of the Constitutional Treaty in 2005. The June European Council agreed on a very detailed and comprehensive mandate for a new Intergovernmental Conference that led three months later already to a final deal on the Lisbon Treaty under Portuguese Presidency.

As things went on, she established herself as probably the most active and influential member of the club, working hard behind the scenes, showing tolerance for the positions of others but putting her foot down when things got out of hand, constantly proposing compromises. She is a calm, rational person with a scientific background. She wants to understand all the aspects of a file before taking her stance. I remember as late as 2019, in the debate on whether to go to -55% of emission cuts, she said at some stage in the meeting: “Look here, I simply cannot subscribe to this objective now, I do not have the elements of what it means on the ground.” (“Ich will keine Katze im Sack kaufen”).

There are two major instances that maybe best illustrate her way of working: her role in solving the sovereign debt crisis and her contribution to the Recovery package as a response to the COVID-19 crisis. In both instances Germany was at the same time a key player and in the camp of those who were reluctant towards an EU-wide solution.

It is worth pointing out that a German Chancellor has constraints a French President does not have: a Bundestag with real autonomy,  a coalition partner that has its own agenda, and very powerful Länder that make their voices heard via the Bundesrat. It is therefore difficult for a German Chancellor to improvise on the spot, to take swift decisions or bold initiatives, sometimes to the dismay of the French who interpret this as a lack of will to cooperate. This should be borne in mind when evaluating Chancellor Merkel’s European legacy.

Concerning economic policy, while some countries plead for a more Keynesian demand-driven policy,  others consider that sustainable growth is only possible if you control your public deficits and the public debt. Germany belongs to the latter category. Because of the weight of the net payers,  this view was predominant in the setting up of the single currency. The Stability and Growth Pact (SGP), the No bail-out clause as well as a restricted role for the ECB were necessary to convince Germany to relinquish the D-Mark. As the sub-prime crisis broke, the predominant view in Germany was that the Member States in trouble were guilty of not having provided for safety buffers when the times were good. They were not completely wrong, but they were not completely right either, because this crisis hit everybody, including countries that had conducted a sound fiscal policy. So it took time to convince the Germans and the like-minded countries that this could not be business as usual. This explains the inadequate initial reaction of the EU.

It is here that Chancellor Merkel played a major role, slowly convincing the Bundestag and the electors to give leeway to the ECB to go to the limits of its treaty mandate, to create a massive European Stability Mechanism, and flexibly apply the SGP. Without her action, this would not have happened, and Greece would have been forced out of the euro, with far-reaching consequences. In a context where the Chancellor is hamstrung by serious domestic considerations when acting in Brussels, Merkel’s achievement here is all the more impressive.

A very similar pattern took place with the COVID-19 crisis. The idea that the EU should take on common debt on the financial markets to help Member States via loans and even direct transfers was anathema to the holders of “orthodoxy”. But this time, the EU reacted far more quickly and forcefully than a few years earlier. The political agreement between Merkel and Macron on the principle of a massive Recovery and Resilience Fund on 18 May 2020 was absolutely vital and allowed the Commission to be bold in its proposals. At the July 2020 European Council marathon of five days and four nights that led to the political breakthrough on the package, Chancellor Merkel worked tirelessly, both in the room and in the corridors, to  nudge colleagues towards agreement. She was a key participant in many of the break-out sessions in small groups that form in such difficult negotiations. Because Germany held the Presidency of the Council at that time, her role was even more prominent than usual.

There is one instance where Chancellor Merkel departed from her usual method, the migration crisis in 2015.  Her “Wir schaffen das” was an emotional and morally-based response where not all the consequences had been carefully thought through. Coupled to  the unfortunate Commission proposal on mandatory migrant quotas, which was the wrong solution at the wrong time, it led to deep divisions across Europe which are still not healed. It unintentionally created the impression that Europe could absorb any levels of migration flows. The message to would be migrants seemed clear. When President Tusk visited a refugee camp in Turkey he was asked when the planes would come to pick them up: “Mrs Merkel wants us to come to Europe”. A second problem was that the other Member States were asked to share the burden of a policy decided unilaterally by Germany.

But Chancellor Merkel was highly instrumental in solving the acute migration crisis, including by ensuring that the EU regained control of its external borders. The deal with Turkey helping to achieve this was very much her work, with the Dutch Presidency and the President of the European Council.

In foreign policy, Germany is often accused of being too much focused on her exports and to lack strategic vision. There is an element of truth in this, for historical reasons. But Chancellor Merkel’s remarks during the Trump years on the need for the EU to rely on its own strengths show that here too things are moving. There is a growing recognition that the relatively cosy post-WWII arrangements where the US catered for European security can no longer be taken for granted. The EU must see the world as it is, and reflect on its own place on the global chessboard. To do that it needs a more pro-active Germany. Mrs Merkel’s insistence on maintaining the dialogue with all players, even the ideologically adversarial ones, is a good guiding principle. Berlin should take up France’s offers on more European cooperation in the field of security and defence. The upcoming French Presidency is a good opportunity to do this, with the adoption of a new Strategic Compass.

To conclude: I admire Chancellor Merkel for what she is and for what she has done for Europe. Her contribution to European integration over the past 16 years has been remarkable overall. She has played a key role in keeping the EU together in the most difficult times since World War II while at the same time convincing her own electorate of the need to take bold steps. We should be thankful for that.