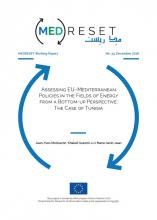 The present report analyses the situation of Tunisia concerning the energy sector in the framework of the EU-funded project MEDRESET. It aims to investigate Euro-Mediterranean policy in the energy sector from a bottom-up perspective. The main findings are the following: concerning energy, Tunisia faces a huge change in its energy status. Until the revolution, Tunisia had covered its energy needs thanks in particular to the gas royalty fees from the Algerian–Italian pipeline. In 2000, it became a dependant country with a growing deficit. Due to the revolution context, implementing a stable energy policy was not a possibility. Smuggling and illegal trade with Libya increased, while energy subsidies reached 7 per cent of GDP. Tunisia has suffered from a growing lack of investments. Considering such challenges, the people’s welfare and the local needs, EU policy regarding energy in Tunisia remains very limited with two Neighbourhood Investment facilities: 1 million euro for SUNREF in 2015, and 1.5 million euro for the Tozeur power plant. The EU has also offered a grant (e.g., European Neighbourhood and Partnership Instrument) of 975,000 euro for a photovoltaic power plant in Nabeul. This must be compared with the global European Neighbourhood Instrument of 213 million euro in 2016 for Tunisia. In sum, the EU energy policy in Tunisia is marginal.