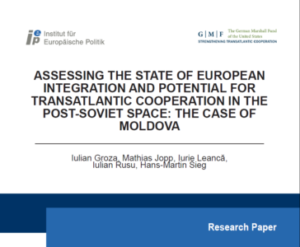 ch paper assesses the state of affairs of the transatlantic cooperation to support transformation processes in the Republic of Moldova, as a case study for the post-Soviet space. The authors review the course of European integration and reform processes in the Republic of Moldova, since mid-2009, when the then liberal-democratic pro-European and pro-reform coalition replaced the eight years of Communist rule.

The authors map out and analyze the impact of the U.S. and the EU support to transformation in the Republic of Moldova and argue for a stronger transatlantic coordination of development support. Finally, the study outlines why the reform processes fell short of expectations and formulates a set of recommendations for overcoming resistance against real transformation in the Republic of Moldova.

The study was prepared in the framework of the German-American Dialogue on the post-Soviet space, which consists of a series of workshops, held in Berlin and Washington, in the period 2016-2017. The project is realized in cooperation with the German Marshall Fund of the United States, with support of the Transatlantik-Programm of the Federal Republic of Germany funded by the Federal Ministry for Economic Affairs and Energy (BMWi) through means of the European Recovery Program (ERP). The next workshop of the dialogue will be held in May 2017 in Berlin.