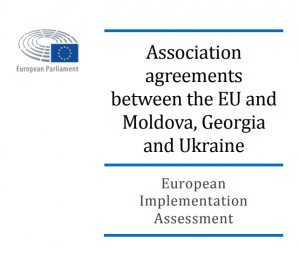 This opening analysis presents the opinions on the implementation of the association agreements with Moldova, Georgia and Ukraine, expressed in the most recent documents of the EU supervising and monitoring bodies. It also presents information on the participation of the three associated countries in selected EU programmes. Further on, it provides the gist of selected resolutions and recommendations of the European Parliament and reports on the results of the survey on the perception of Moldovan, Georgian and Ukrainian citizens about the EU. The opening analysis is predominantly based on existing EU documents and data.

Moldova, Georgia and Ukraine signed their respective association agreements with the European
Union on 27 June 2014. These entered into force on 1 July 2016 in the case of Moldova and Georgia,
and on 1 September 2017 in the case of Ukraine.

In November 2017, the European Parliament in its recommendation on Moldova, Georgia and
Ukraine addressed to the European Partnership summit, underlined the need to deepen EU
cooperation with these countries beyond the association agreements with them and to
acknowledge their European aspirations.

The full study including the list of authors is available here.