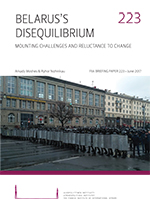 The pillars of social and political stability are eroding in Belarus, and the economy is deteriorating rapidly. In view of the limited budget resources, absence of large-scale foreign investments and decrease in Russian subsidies, there is little prospect of maintaining the old social contract, as revealed by the popular protests in spring 2017.

Russia is advancing its interests in Belarus, while Minsk’s freedom of maneuver is narrowing. Moscow is intent upon the deepening integration of Belarus into the Russia-centred system of economic and security alliances, and is able to exploit pro-Russian sympathies among the

population. The Belarusian authorities recognize the challenges, but time after time choose the old methods of dealing with them. They refuse to undertake economic reforms and use repressions of scale.

The resumed interaction between Belarus and the West is driven by geopolitical considerations as well as Minsk’s desire to find new sources of economic assistance. But its fear of a “Western conspiracy” aimed at bringing about political liberalization and an eventual regime change continues to undermine trust in the relationship. Western actors, the EU in particular, should engage with Belarus only on conditions that promote the transformation of both the regime and society, even if slowly. The failure to do so, and the country’s failure to transform, may lead to the emergence of a serious crisis situation at Europe’s borders.