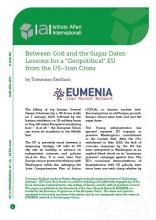 The EU is presently stuck between a deepening strategic rift with its US ally and its inability to advance its independent interests and policies vis-à-vis Iran. It is now clear that Europe cannot protect its relations with Washington while also salvaging the Joint Comprehensive Plan of Action (JCPOA), or Iranian nuclear deal. Borrowing from an old Persian proverb, Europe cannot have both God and the sugar dates. The Trump administration has ignored repeated EU requests to preserve Washington’s commitment to the nuclear deal. After the US’s withdrawal in May 2018, the lack of concrete responses by the EU has been interpreted in Washington as an implicit blank check on its “maximum pressure” campaign against Iran. The EU’s occasional demonstrations of dissatisfaction with US policies have since been met with sharp rebukes by the White House.