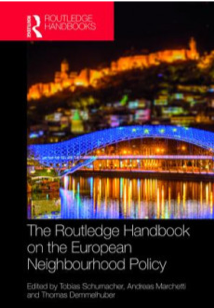 From its very beginning, the European Neighbourhood Policy (ENP) was designed as an alternative to enlargement. It was limited to neighbouring countries that were not designated as candidate or potential candidate countries, and it offered them participation in a variety of European Union (EU) policies without integration into the EU polity – ‘sharing everything but institutions’ according to Commission President Romano Prodi (Prodi 2002). The ENP reflected both the EU’s reluctance to commit itself to a further expansion of its membership and its realization that the enlarged Union needed to deal with the interdependence at its prospective new borders. It was designed to create a ‘ring of friends’ and zone of stability beyond its formal members (ibid.). At the same time, Enlargement Commissioner Günter Verheugen announced that the new policy would ‘build on the experience’ of eastern enlargement (quoted in Johansson-Nogués 2007: 26), and scholars have highlighted the organizational and practical path-dependencies of enlargement in the ENP (Kelley 2006).