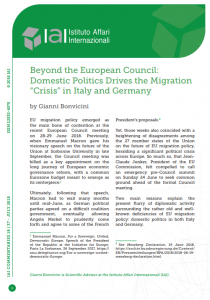 EU migration policy emerged as the main bone of contention at the recent European Council meeting on 28-29 June 2018. Previously, when Emmanuel Macron gave his visionary speech on the future of the Union at Sorbonne University in late September, the Council meeting was billed as a key appointment on the long journey of European economic governance reform, with a common Eurozone budget meant to emerge as its centrepiece.

Ultimately, following that speech, Macron had to wait many months until mid-June, as German political parties agreed on a difficult coalition government, eventually allowing Angela Merkel to prudently come forth and agree to some of the French President’s proposals.

Yet, those weeks also coincided with a heightening of disagreements among the 27 member states of the Union on the future of EU migration policy, heralding a significant political crisis across Europe. So much so, that Jean-Claude Junker, President of the EU Commission, felt compelled to call an emergency pre-Council summit on Sunday 24 June to seek common ground ahead of the formal Council meeting.