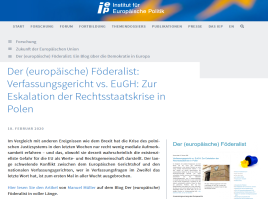 Manuel Müller analyses the crisis in the Polish judicial system in an article in the blog “The (European) Federalist”.

Following the recent escalation, Poland has two competing legal systems, some of which openly contradict each other. The country risks a de facto withdrawal from the European legal community. Linked to this is a constitutional conflict that also extends beyond Poland: Who has the last word on constitutional issues – the European Court of Justice or the national constitutional courts?