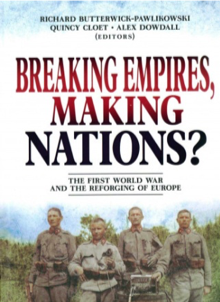 One hundred years on, the First World War is being debated as never before. This applies both to countries where the ‘Glorious Dead’ of the ‘Great War’ have long been at the heart of national commemorations, and to those where memories of the First World War have long been eclipsed by those of the Second. This book examines the transformations wrought by the First World War from a variety of perspectives, covering western, central and eastern Europe, and civilian and military experiences alike. It addresses five principal themes. The first is the titular question of ‘breaking empires, making nations?’ While some empires were indeed broken, others were reforged by the war and its aftermath. While national forces changed empires, imperial forces altered nations. The second is the hitherto unprecedented scope, scale and intensity of the war, which, whatever its origins, soon became a war of peoples, fought for great causes. The third is the resilience of states and societies in the face of this intense pressure. The fourth is extension – the conflict extended well beyond the Western Front and in many places lasted longer than the Armistice of 11 November 1918. Commemoration and memory also varied considerably between countries and over time, and so did reflection on the meaning of the conflict for the idea of Europe – the fifth and final theme. The book contains an introduction by the editors and ten chapters written by leading historians based in nine different countries.