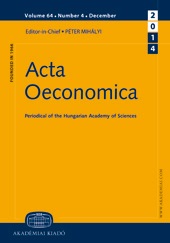 This paper is based on a  lecture held at Second World Congress of Comparative Economics titled «1917 –2017: Revolution and Evolution in Economic Development» in June 15–17, 2017 by Miklós Somai.

It reviews the deeper societal and economic reasons behind the British choice of leaving the European Union. Firstly, it addresses the detailed results of the referendum and the long-standing sceptical British attitude towards European integration. Next, there is an analysis of the net budgetary contribution that changed enormously after the Eastern Enlargement. It is argued that the rise in the immigrant/native ratio had a significant impact on employee’s pay level in certain areas, therefore pro-Brexit campaigners highlighted migration as one of the major problems arising from EU membership. Increasing income and wealth inequalities and a growing anti-elite sentiment in British society, coupled with the negative image of Brussels bureaucrats and a British approach to the rule of law that is fundamentally different from the continental one, also contributed to the final result of the referendum. The paper ends with a glimpse into the close future, emphasising that the future of British-EU relations depends wholly on the pragmatism and wisdom of the negotiating parties.