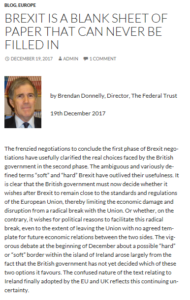 The Federal Trust’s director Brendan Donnelly argues that the ambiguous and variously defined terms “soft” and “hard” Brexit have outlived their usefulness. The British government must now decide whether it wishes after Brexit to remain close to the standards and regulations of the European Union, thereby limiting the economic damage and disruption from a radical break with the Union, or whether, on the contrary, it wishes for political reasons to facilitate this radical break, even to the extent of leaving the Union with no agreed template for future economic relations between the two sides.