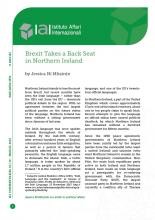 Northern Ireland stands to lose the most from Brexit, but recent months have seen the Irish language – rather than the UK’s exit from the EU – dominate political debate in the region. With no agreement between the two largest political parties on the future status of the language, Northern Ireland has been without a sitting government since January of last year.