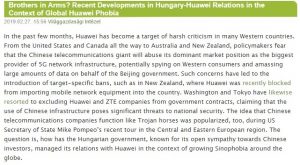 In the past few months, Huawei has become a target of harsh criticism in many Western countries. From the United States and Canada all the way to Australia and New Zealand, policymakers fear that the Chinese telecommunications giant will abuse its dominant market position as the biggest provider of 5G network infrastructure, potentially spying on Western consumers and amassing large amounts of data on behalf of the Beijing government. Such concerns have led to the introduction of target-specific bans, such as in New Zealand, where Huawei was recently blocked from importing mobile network equipment into the country. Washington and Tokyo have likewise resorted to excluding Huawei and ZTE companies from government contracts, claiming that the use of Chinese infrastructure poses significant threats to national security. The idea that Chinese telecommunications companies function like Trojan horses was popularized, too, during US Secretary of State Mike Pompeo’s recent tour in the Central and Eastern European region. The question is, how has the Hungarian government, known for its open sympathy towards Chinese investors, managed its relations with Huawei in the context of growing Sinophobia around the globe. […]