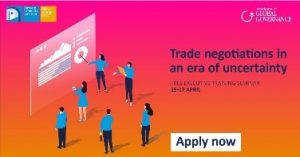 Trade negotiations in an era of uncertainty

Trade strategy is now shaped by an environment of rapid economic and technological change in which we cannot assume that all countries always share trade liberalisation objectives or support the rulesbased trading system. High profile protectionist actions seem increasingly legitimate in some countries, but routine protectionism never went away in many more. The potential direct and global ripple effects of a retreat from multilateralism bring considerable uncertainty, not least by undermining what we thought were the foundational norms of trade relations. Questions about whether new players in the system will accept those norms add to the uncertainty, if they privilege state-directed rather than market-oriented firms. At the same time, some citizens in the advanced economies think that trade and globalisation have not worked for them, and they face new uncertainty as artificial intelligence changes the future of work.

This course focuses on the strategic challenges for trade policy in a world adapting to rapid structural change and unpredictable policies. How should national interests be analysed? How can governments defend those interests from protectionist actions taken by others, while at the same time working to reduce fixed costs for firms of trading, and reducing uncertainty in partner country markets by getting them to make binding commitments? How should we think about operationalising a “progressive trade agenda”?

Where? in Florence, Robert Schuman Centre for Advanced Studies