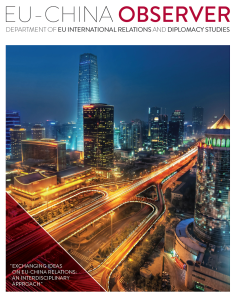 Call for Contributions for the EU-China Observer #1.16 on the topic of China’s Market Economy Status in EU-China relations – Submission deadline: 15 January 2016

The Baillet Latour Chair of European Union-China Relations and the EU-China Research Centre at the College of Europe (Bruges) are calling for contributions to the first issue of the EU-China Observer of 2016. The issue will focus on the topic of China’s Market Economy Status (MES) in EU-China relations.

The accession of China to the World Trade Organization (WTO) in 2001 is considered a major landmark for China’s integration into the global economy. In the context of WTO law, MES means that domestic prices are based on supply and demand – which was not yet the case for China upon accession to the WTO. Therefore, the accession protocol states that price comparability in determining subsidies and dumping does not need to be established by comparing prices to the domestic market, but can be established by employing a different methodology (e.g. by comparing to prices in other markets). However, the protocol also states that “[i]n any event, the provisions of subparagraph (a)(ii) shall expire 15 years after the date of accession.” (see: Accession Of The People’s Republic Of China – Decision of 10 November 2001).

The 15-year period will be due by December 2016, and in the meantime, debate began to heat up whether this protocol applies directly to WTO member states and whether this would mean that the EU will have to automatically grant MES to China. Commissioner Cecilia Malmström argued in an interview with The Wall Street Journal that “there’s no automaticity in that”.

With discussions about the MES becoming more prominent this year, we would like to invite researchers and practitioners to examine the issue of China’s MES from a legal and economic perspective. What may be the potential impact for the EU as well as on EU-China relations of either granting or not granting MES to China? What could be the implications for global economic governance and the role of the WTO if China does not obtain MES status? As we have witnessed the emergence of new trade blocs and bilateral trade agreements, will the WTO lose importance?

Please send your contributions to EUCO@coleurope.eu by 15 January 2016. For any questions related to the EU-China Observer, please do not hesitate to contact us via the e-mail address mentioned above.