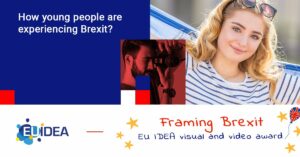 EU IDEA is launching a video and visual award aimed at giving the opportunity to young people to express through visual artworks how they are experiencing and interpreting the exit of the United Kingdom (UK) from the European Union (EU). This type of contest aims to foster the engagement of youth, which are interested by the European affairs in many ways but are not always properly and actively involved in the public debate. On Brexit, the youngsters’ standpoints and sentiments have been little covered, despite these people will be in the medium-long term the most affected by the major implications of the process.

The Brexit video and visual award would like to give a contribution in filling this gap by supporting the engagement of young people through the art. The contest is aimed at people between 18 and 30 years old. They can be accompanied by short written text, and will be assessed by a jury composed by the members of the Executive Board of the project and two professionals in the field of visual arts. The jury will nominate two winners to whom will be guaranteed a wide diffusion of their work through all the EU IDEA dissemination channels. Furthermore, the winning works will be awarded and presented publicly during the final conference of the project in Brussels.