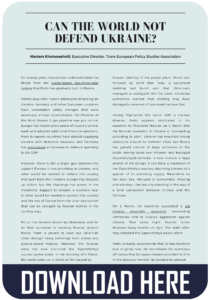 For twenty years, Europe has underestimated the threat from the authoritarian neo-imperialist regime that Putin has gradually built in Russia.

Within days after Putin’s attempted Blitzkrieg on Ukraine, Germany and other European countries have undertaken policy changes that were previously almost inconceivable. Certification of the Nord Stream 2 gas pipeline was put on ice. Europe has frozen some assets of Russia’s central bank and adopted additional financial sanctions. More European countries have started supplying Ukraine with defensive weapons, and Germany has announced an increase in defence spending to 2% GDP.

However, there is still a major gap between the support Europe is now providing to Ukraine, and what would be needed to defend the country and push back the invaders. Europe has stepped up action, but the challenge has grown in the meantime. Support to Ukraine is nowhere near to what would be needed to protect the country and the rest of Europe from the utter destruction that can be wrought by Russian bombs in the coming days.

For all the heroism shown by Ukrainians, and for all their successes in resisting Russian ground forces, Putin is poised to wipe out Ukrainian cities through heavy bombings from planes and ground-based missiles. Moreover, the Russian army has now encircled the Zaporizhzhya nuclear power plant. In the morning of 4 March, the world woke up in shock at fire caused by Russian shelling of the power plant. Shock was followed by relief that “only” a peripheral building had burnt and that Ukrainians managed to extinguish the fire. Later, Ukrainian authorities warned that shelling may have damaged a reservoir of processed nuclear fuel.

Having frightened the world with a nuclear disaster, Putin appears vindicated in his assertion to President Macron on 3 March that the Russian operation in Ukraine is “proceeding according to plan”. Ukraine has mounted strong resistance around its northern cities, but Russia has gained control of large territories in the south. Having taken over Kherson and besieged Zaporizhzhya/Enerhodar, it now controls a large stretch of the Dniepr. It can force a shutdown of the Zaporizhzhya reactors, depriving Ukraine of a quarter of its electricity supply. Meanwhile on the Azov Sea, Mariupol is surrounded, freezing and starving – the last city standing in the way of a land connection between Crimea and the Donbass.

Putin certainly understands that he has nowhere else to go by now. He has missed the numerous off-ramps that European leaders provided to him in the previous months. He decided to unleash full-scale war because of his deep hatred of Ukraine, his rejection of Ukraine as a state entitled to make sovereign choices. Now that it is proving impossible for (demoralised) Russian ground forces to conquer Ukraine in conventional ways, and now that the West has imposed severe economic sanctions on Russia, Putin has reached a point of no return. He will pursue destruction of Ukraine with bombs and nuclear threats, trying to force a surrender. He appears ready to pull Ukraine with him into his grave. But he might also still win, by raising the stakes to the point where the rest of the world gives up.

Will the world be scared away from doing what it takes?

From the onset of Russian military operations on 24 February 2022, and even before, the US and other NATO countries have sought to avoid direct military confrontation with Russia, concerned that this would lead to a broadening and escalation of the war. Military supplies to Ukraine have comprised mainly anti-tank missiles, drones and ammunition. The provision of approximately 70 fighter jets to Ukraine was announced, but then denied by the EU countries concerned.

#CloseTheSky has been a key request from the Ukrainian government. Ukrainian soldiers and territorial defence units have demonstrated extraordinary courage in resisting Russian ground forces. Nonetheless, Ukraine is not able to turn the tide of the war, and will not be able to resist forever, unless it regains control of its airspace. On 3 March President Zelenskyy once again asked Western countries either to close the sky over Ukraine or to provide Ukraine with military planes.

The current mix of military support to Ukraine and of Western sanctions is not sufficient to prevent a full Russian takeover of Ukraine within several weeks, following highly destructive bombing of Ukrainian cities. For all European self-congratulation about the unprecedented decisions taken, the support provided and announced so far is perhaps sufficient to help Ukraine lose honourably, but not to prevail.

Can the world really afford for Ukraine to lose this war to Russia? This would be an incredible boost to heavily armed authoritarian regimes all around the planet. The destruction or takeover of the Ukrainian state would mark the destruction of the post-WWII international order. It would be a lesson well remembered by all future nuclear-armed regimes contemplating attacks on their weaker neighbours.

In the meantime, Ukrainians are suffering on a massive scale. While we Europeans are gathering in support of Ukraine, lighting monuments in blue and yellow and making charity donations, the children of Ukraine are praying that the next bomb does not fall on them and the next bullet does not kill their parents. Since last night, they also have to fear nuclear accidents.

It is not sustainable and it is not right to continue relying on Ukrainians to block the Russian offensive with their own bodies. As Dalia Grybauskaitė put it, “either you participate in [the war] and fight the aggressor, or become an accomplice to war crimes by just standing and watching Ukraine and its people being destroyed. Yes, an accomplice.”

Caution is obviously necessary to avoid escalation into a nuclear war. However, it is past time to build broad international support for a mandate to close the sky over Ukraine. Such support to Ukraine’s defence could be organised not only by NATO, but on behalf of all countries rejecting Russia’s arbitrary invasion of Ukraine and its indiscriminate shelling of civilian areas. European diplomats should work with others from the 141-strong majority in the United Nations to formulate such a mandate.

Many levels of possible engagement exist between the current level of European support for Ukraine and actual nuclear war. Increased engagement must be explored. As the Zaporizhzhya incident shows, inaction by the West will not guarantee the avoidance of nuclear disasters either. If only a few Russian rockets had fallen on more central parts of this nuclear power plant, Europe would be living a nuclear disaster already.

If NATO countries continue to maintain that direct confrontation between NATO forces and Russian forces must be avoided at all cost, then it should find other ways to enable Ukraine to regain control of its territory and airspace. As Garry Kasparov noted, “if [NATO leaders] care so much about the fine print and think Putin does too, [they could] ask Zelensky to issue Ukrainian passports to any volunteer to fly in combat. Sell jets to Ukraine for €1 each and paint UKR flags on them. Do you think Putin will care? This is already World War III. Putin stated it long ago and Ukraine is only the current front. He will escalate anyway, and it’s even more likely if he succeeds in destroying Ukraine because you have again convinced him you won’t stop him even though you could.”

Putin must be stopped for real, sooner rather than later. NATO countries are already “involved” in supporting Ukraine, but not enough. The time to take further effective steps is now. In fact, it was time already before Putin started heavy bombing of cities and seized the nuclear power plant. As 141 countries have agreed in the UN General Assembly, the current situation comes from an aggression by Russia. There has been no threat from Ukraine to Russia. The challenge is solely to help Ukraine to defend its territory and its people.

Will the world coerce Zelenskyy to surrender?

It is clear that neither the 141-strong majority in the UN nor the major powers that abstained (such as China or India) have yet done the maximum possible to support Ukraine to prevail in the war that Russia has unleashed. It remains an urgent challenge to achieve a ceasefire – but with every passing day, the ceasefire will more and more resemble a capitulation by Ukraine.

Given the prospect of mutually assured destruction in the event of escalation into nuclear war, some analysts argue that NATO’s limited ability to support Ukraine is similar to NATO’s inability to intervene during the Soviet invasion of Czechoslovakia in 1968. That invasion was followed by more than 20 years of Soviet occupation.

Nobody should feel lightly about sacrificing Ukraine for several decades. As The Economist points out, and as Volodymyr Zelenskyy has warned, the Baltics, Georgia or Moldova can be next. Putin has also already requested “security assurances” from Finland and Sweden. Whenever the West adopted lukewarm measures against Russia, such as in 2008 and 2014, these were taken by Putin as confirmation of impunity and emboldened him in his neo-imperial pursuit.

However, at the current level of limited external support to Ukraine, and with the menace of a nuclear disaster, there is a growing risk that Ukrainian leaders will again be offered evacuation by their allies. Instead of more ammunition, one last offer of a ride. There is growing risk that a provisional agreement will be made between nuclear powers, whereby Ukrainian territory and statehood will be sacrificed to Russia, until a reversal is achieved in the long term when Putin’s regime implodes in a similar way as the USSR.

This would be a terrible price to pay – by Ukraine and by the whole of Europe – for Europe’s current inability to provide Ukraine with fighter jets and additional air defence equipment.

Everyone in the West who cares to maintain a peaceful international order for the coming decades should certainly not be comforting themselves today that “all possible support is being provided to Ukraine already”.

As Ukraine’s Foreign Minister Dmytro Kuleba told his NATO counterparts on 4 March: “The moment will come when you will be willing to provide us with anything, literally anything that we need to stop Putin from hitting you and turning Europe into a nightmare. My hope, my only hope, is that it will not be too late.”

All the opinions expressed in this publication are the sole view of the author, and do not represent the position of the Trans European Policy Studies Association (TEPSA) or of its Members.