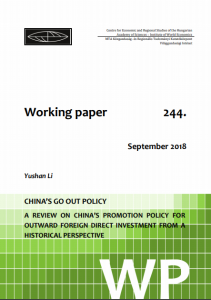 China became the second largest outward investor for first ever in 2015. The dominant role of Chinese “go out” policy on such rising OFDI is agreed by a growing number of literatures. This paper presents historical view of that policy and discuss how the government is helping Chinese MNEs to invest abroad. Overall, the “go out” policy has been through four stages, from the initiation, to the formalization, to the expansion and to the new era. As breakthroughs have been made, the regulatory framework is still cumbersome. Although the central government is working on simplification and deregulation, the latest change of the framework might be seen as a signal of centralization. While several challenges ahead, the dominant role of Chinese SOEs in OFDI and the market asymmetry between China and other countries are two problems that worries foreign investors the most.