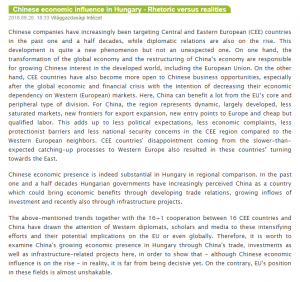 Chinese companies have increasingly been targeting Central and Eastern European (CEE) countries in the past one and a half decades, while diplomatic relations are also on the rise. This development is quite a new phenomenon but not an unexpected one. On one hand, the transformation of the global economy and the restructuring of China’s economy are responsible for growing Chinese interest in the developed world, including the European Union. On the other hand, CEE countries have also become more open to Chinese business opportunities, especially after the global economic and financial crisis with the intention of decreasing their economic dependency on Western (European) markets. Here, China can benefit a lot from the EU’s core and peripheral type of division. For China, the region represents dynamic, largely developed, less saturated markets, new frontiers for export expansion, new entry points to Europe and cheap but qualified labor. This adds up to less political expectations, less economic complaints, less protectionist barriers and less national security concerns in the CEE region compared to the Western European neighbors. CEE countries’ disappointment coming from the slower-than-expected catching-up processes to Western Europe also resulted in these countries’ turning towards the East. (…)