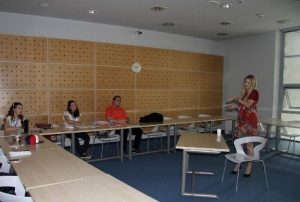 The Academia Aestiva Internationalis summer school was held between 2 and 7 July 2018 at the Faculty of Social Sciences in Ljubljana, Slovenia. Each year the participants at the summer school discuss a challenge besetting the international community. This year their focus was populism.

At the event, Nina Pejič, a Junior Researcher at the Centre of International Relations, Faculty of Social Sciences, University of Ljubljana, gave a lecture called ‘Toxic nationalisms: a case of Kosovo’. In her interactive lecture, the participants discussed the land ownership, history, mythology and perceptions surrounding the territory of Kosovo as a case of divisive nationalisms that navigate between facts and myths.

Ms Pejič pointed out that Kosovo itself is a recent construct and that the cause of the conflict should be attributed to constant ideological and political manipulation, rather than ethnic or religious hatred. Ms Pejič is the co-author of the book Limits to the European Union’s Normative Power in a Post-conflict Society: EULEX and Peacebuilding in Kosovo, published by Springer in May 2018, in which she further discusses the above-mentioned issues.