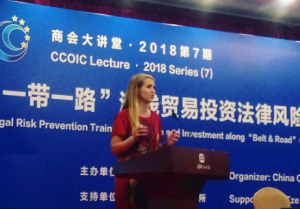 Nina Pejič, a Junior Researcher at the Centre of International Relations, Faculty of Social Sciences, University of Ljubljana, took part in the training program hosted by the Ministry of Commerce of China and organised by the China Council for the Promotion of International Trade (CCPIT) Training Centre.

The training was held in Beijing, China, between 6 and 27 June 2018. It focused on the economic globalisation and the ‘Made in China 2025’ program for countries along the Belt and Road Initiative. Participants were exposed to lectures as well as field trips to some of the prime Chinese industry locations in the Zheijang province (Ningbo and Shaoxing) and the Jilin province (Changchun).

At the event, Ms Pejič held three lectures on Sino-Slovene cooperation. In her lectures, she focused on the current state of (Chinese) foreign direct investments in Slovenia as well as the main investment potentials for foreign investors entering Slovenian and other European markets.