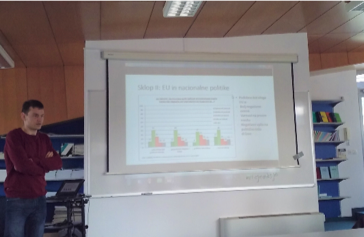 On 30 January 2018, the Centre of International Relations at the Faculty of Social Sciences, University of Ljubljana (CIR) organized a workshop to present and discuss the initial results of a national study on populism and attitudes towards the EU in Slovenia. The study was prepared by CIR and the Public Opinion and Mass Communication Research Centre at the same University as part of a larger EU-funded project on Anti EU-Rhetoric and Nationalistic Populism in Central Europe. The results of the survey in Slovenia largely confirmed a strong pro-European orientation of Slovenes. Nevertheless, specific groups of respondents (such as the less educated and less skilled respondents along with respondents from the less developed regions or the countryside) appeared relatively more Eurosceptic.

A comparative analysis with results from national studies conducted by project partners from Austria, Hungary, Czech Republic, and Slovakia will follow. The lead partner in the project is also a TEPSA member: i.e. the Austrian Society for European Politics from Vienna, Austria; while other partners include EUROPEUM – Institute for European Policy, Prague, Czech Republic; Center for European Neighborhood Studies, Central European University, Budapest, Hungary; and GLOBSEC Policy Institute, Bratislava, Slovakia.

The project is financed through the Europe for Citizens Programme of the EU.