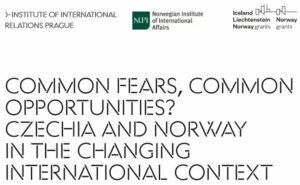 Researchers from the Institute of International Relations Mark Galeotti, Jan Mazač, Elena Zhirukhina, and Benjamin Tallis together with researchers from Norwegian Institute of International Affairs (NUPI) recently published a policy brief called “Common Fears, Common Opportunities? Czechia and Norway in the changing international context”. The authors of the policy brief participated in the COMFEAR project whose aim was to identify common fears among Czech and Norwegian public and policymakers and their role in forming public opinion and foreign policy. Moreover, the project aimed to deepen cooperation between IIR and NUPI.

The policy brief is a result of conclusions from roundtable discussions with policy makers and researchers that took place in Prague and Oslo in late 2019 and early 2020. The researchers studied how to better respond to fear factors and move beyond them in foreign policy. A key observation made in the new brief is that while changes in American, Chinese and Russian foreign policies may trigger anxiety and uncertainty among smaller European states, fears like this can also have productive effects on foreign policy thinking and practice. For states like Czechia and Norway, it can create opportunities for re-thinking support networks and reaching out to new partners.