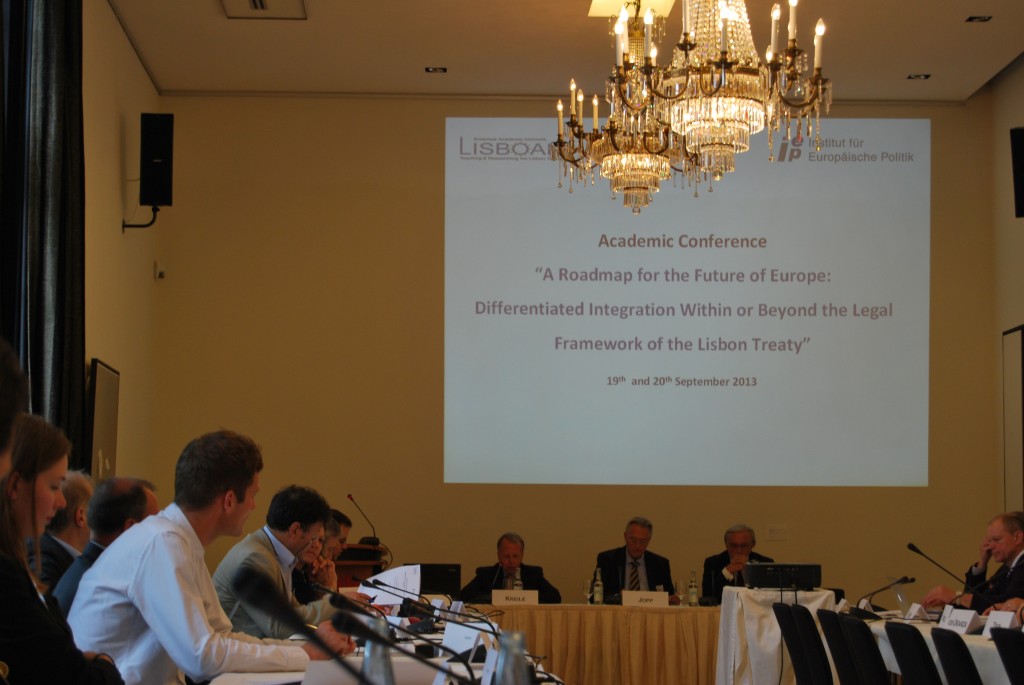 On 19 and 20 September IEP hosted its annual academic conference in Berlin, entitled A Roadmap for the Future of Europe. The conference, organized with the financial support of the Erasmus Academic Network Lisboan, aimed to debate a roadmap for the EU’s future in terms of analyzing the possible ways out of the current crisis and discussing the different prospects for the future composition and structures of the European Union. Differentiated integration featured prominently in the analysis.

Prof. Loth elaborated that in terms of a historical perspective differentiated integration is not a new phenomenon and needs to be interpreted in light of the historical context. Prof. Schimmelfennig provided a clear picture of institutional and constitutional differentiation. He proved that deepening has increased in line with widening and that differentiation is a result from this evolution. Prof. Wessels extended the conceptual frame of differentiation by elaborating on the relevance of the dynamics of power, geopolitics and geoeconomics and their interplay.

From a legal perspective the panelists Prof. Rossi and Prof. Peers highlighted their clear understanding of how differentiation is structured within the Lisbon Treaty and beyond. The value of enhanced cooperation was emphasized.

The session on the lessons to be learnt from the Area of Freedom, Security and Justice drew the picture of the complexity and volatility of differentiation created by the opt-out and opt-in provisions for the UK, Ireland and Denmark (Dr. Tekin). The example of Prüm highlighted the role and implications of the so-called laboratories of cooperation among only a few Member States outside the EU’s legal framework (Prof. Luif). Dr. Pawlak elaborated on the external dimension of the AFSJ.

The keynote speech was given by Mr. Freytag von Loringhoven, who explained the role of Germany within the European Union and the two options for the future development of the EU: either pragmatic continuation of deepening with the two chief goals of financial consolidation and increased competitiveness or a truly deepened integration that substantially changes the institutional structures of the EU.

Discussions of the second day were dedicated to the Economic and Monetary Union. Prof. Belke, Dr. Felke and Dr. von Ondarza explained the assessed the instruments for deepening the Eurozone and their implications. Dr. Agh, Dr. Braun and Dr. Lang discussed the Eurozone and its eastern neighbours. Dr. Agh emphasized that differentiated integration is not solely to be perceived a positive tool for managing heterogeneity among the EU Member States but can also create deficits within the democratic, the governance and the sustainability dimension.

Overall, the debates highlighted that differentiated integration is much more advanced than one would expect. This renders the complexity of a potential roadmap for the EU’s future rather high. The development of a general definition of and a conceptual frame for the analysis of differentiated integration is therefore crucial. Additionally, a clear vision for the Single Market and the EMU and of what we expect from a single currency will be essential for such a roadmap.

For more information see the PROGRAMME.