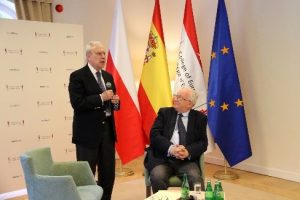 On Monday 20 May 2019, the College of Europe in Natolin, in cooperation with the Spanish Embassy in Warsaw and the Faculty of “Artes Liberales” of the University of Warsaw, organized a special conference by H.E. Francisco Javier Rupérez, Ambassador of Spain, former Spanish Ambassador to the USA (2000-2004), former Deputy Secretary General of the UN Security Council and Executive Director of the Security Council Counter-Terrorism Committee (2004-2007). The conference entitled “The national and international fight against terrorism” was moderated by Professor Jan Kieniewicz, former Polish Ambassador to Spain (1990-1994). For more information please visit our website.