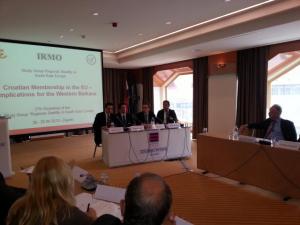 The Institute for Development and International Relations (IRMO), Directorate for Security Policy at the Austrian Ministry of Defense and Sports, the Austrian National Defense Academy and the PfP Consortium of Defense Academies and Securities Studies Institutes jointly organized a conference “Croatian Membership in the EU – Implications for the Western Balkans” held from 26th to 28th September 2013 in Hotel Dubrovnik in Zagreb. Given the fact that Croatia became full-fledged member of the EU in July 2013, the conference was organized with the aim to try to detect the consequences of Croatian accession to the EU on political and economic life in Croatia, Western Balkan countries and the EU itself. The conference also gave the opportunity to hear the perception of the ongoing trends by major foreign actors with recognizable influence on the developments in South East Europe. Apart from the IRMO researchers conference featured prominent speakers such as: Ernst M. Felberbauer (Austrian National Defense Academy, Vienna), Franz-Lothar Altmann (Bucharest University) and Matthew Rhodes (George C. Marshall Center for Security Studies, Garmish-Partenkirchen).