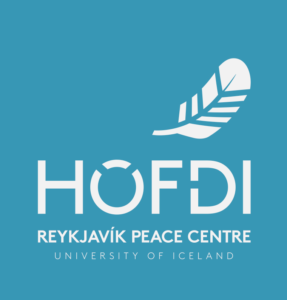 Today’s generation of youth is the largest the world has ever known and often forms the majority of the population of countries affected by armed conflict. The disruption of young people’s access to education and economic opportunities has a dramatic impact on durable peace and reconciliation. In the context of war and conflict, youth have too often been viewed only as either the perpetrators of violence or its victims, and not as potential agents of positive change. In recent years the focus has been shifting and the world’s most powerful nations have started to recognise that young people are a force for peace. This common understanding gained new ground in December 2015 with the UN resolution 2250 on youth, peace and security.

Focusing on the positive changes young people are making in their communities and societies, Höfði Reykjavik Peace Centre wants to bring together a dynamic group of young people and creative thinkers to engage in an inter-generational dialogue, seeking innovative solutions to global threats and challenges.

Keynote addresses will be given by Tawakkol Karman and Unni Krishnan Karunakara. Tawakkol Karman is a Yemeni journalist and Nobel Peace Prize Laureate in 2011. At that time she was the youngest Nobel Peace Prize Laureate. Unni Krishnan Karunakara is a Senior Fellow at Yale Jackson Institute for Global Affairs and former International President of Médecins Sans Frontières / Doctors Without Borders (MSF). Amongst other speakers are: Emi Mahmoud, a poet and activist that was on the BBC’s 100 Women list of “the most inspirational women across the world in 2015” and Deqo Mohamed, a Somali-born doctor that has helped refugees and is Chief Executive Officer at Dr. Hawa Abdi Foundation.